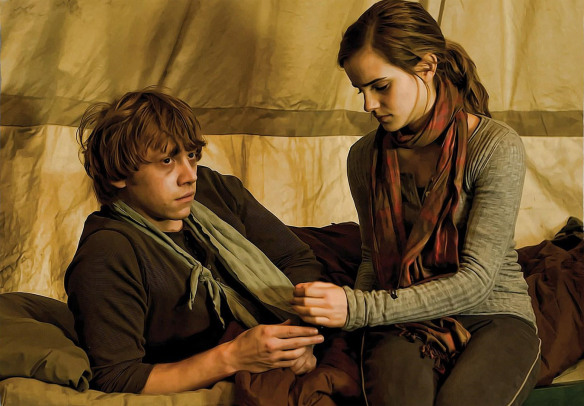 I have frequent Potter Film Marathons, and I absolutely adore the movies. As a series, they’re one of the best book to movie adaptations out there. But there are still some small, yet glaring, issues.

I glossed over some of these things in Part 1 and Part 2 of my Potter Film Rankings, but here I’ll go more in depth about the five biggest (and only) issues I have with the films.

1. Ron being downgraded and sidelined as the series progresses.

He’s great in the first two. Steps slightly down in 3, 4, and 5 (not too noticeable though). 6, 7, and 8 he takes a HUGE backseat to Hermione. And, by extension, the Harry x Ron friendship withers away in a similar fashion.

Look at their relationship in the first two, now compare it to when Harry tells them he’s about to go die. Ron just looks at him. That scene makes me so uncomfortable and sad when I watch it. I just want them to hug! Look at the very last shot of the ENTIRE SERIES. The camera literally zooms in on Harry and Hermione’s faces. Ron’s in there too, but he’s almost cut out by the end.

I’m not sure if this is because Emma Watson broke out more as an actress? I personally think that the directors/writers hardcore shipped Harmione (Harry x Hermione). And I actually really love the additional Harmione scenes we get throughout the film series.

What I don’t love is how Ron’s character and friendship with Harry suffered for it. That wasn’t necessary. I wish that there were as many great scenes between Ron x Harry as there are between Harmione in the latter half of the series.

This, by far, is the biggest and most obvious issue with the films. Ron’s character is so underappreciated because of his movie portrayal, but he isn’t the only one that suffers from being pushed aside. Onto the next cinema sin…

2. The Greatness of James Potter being completely ignored, and his character being lowkey villainized in the end.

All the “bad parts” about him make the cut. But the part about him rescuing Snape, or Remus and Sirius reassuring Harry about his character… Nope, they’re all cut out. And for what? To try and make Snape look better.

If you’ve only watched the films, James is basically painted as this jerk who gets the girl even though he bullied poor, innocent Snape. And Harry seems upset about it. That part is actually a storyline in the books. But we see Harry realize that James changed and was more than that. He matured and became a man that was worth Lily’s love. In the films, Harry seems to kind of turn against him? It’s most apparent for me in the resurrection stone scene.

Sidenote: Lily didn’t even “friendzone” Snape. Unless I’m forgetting something, he never even confesses his feelings to her. There was never a love triangle. James was a teenage bully who matured into a good man, while Snape was a teenage wizard-nazi who joined a cult and lost the best friend he secretly loved because he called her a racial slur. He matured into a wildly intelligent secret agent who bullied children from a position of power. I won’t deny that he was brave and cunning… but he was also cruel. And I can only shudder to think about how the story would’ve morphed into a weird Petyr Baelish x Sansa Stark storyline if Harry was a girl that looked like Lily (Snape’s crush) instead of a boy who looked like James (Snape’s nemesis).

As much as I hate him, I do actually still appreciate and love Snape as a character. Within the story, I hate him. But as a reader, I love him. Controversial “heroes” like Snape (and Dumbledore) are great.

Anyways, I just really love James Potter, and he deserved a lot better in the films. I think a lot of hardcore Snape fans overlook canon way too often. Or even worse, people who have only watched the films and only see James through that lens. Here’s all you need to know… James did bully Snape at one time, but he also saved his life and completely changed during his last few years at Hogwarts. James is the better man. I rest my case.

3. Harry and Ginny being one of the most painfully awkward couples I’ve ever watched on screen.

To be honest, their best chemistry moments were in Chamber of Secrets. I’m still annoyed that the quidditch kiss didn’t happen in Half-Blood Prince. The whole thing was written so weirdly. Personally, I think the blame can be equally shared by the writers and actors. Daniel Radcliffe and Bonnie Wright both play their respective character’s pretty awkwardly on screen. It works for Harry, but not so much for Ginny. I know that writing-wise she wasn’t given much to work with… but what she was given, wasn’t done too well. Ginny is brash and fiery in the books, and literallynoneof that translates on screen.

4. The casting of Sirius, Remus, James, Lily, and Peter (aka The Marauders).

I let Snape slide because I can’t imagine anyone else besides Alan Rickman. But the others are less iconic. The Marauders are meant to be young. They’re supposed to be in their early to mid-thirties. In the books, there’s a lot of emphasis on their youth. It’s supposed to be tragic and depict how they were barely adults, fighting a war and sacrificing themselves. It’s something that I thought about a lot in the books, but all of that is lost in the films.

James died at age twenty-one, but he looks like he’s in his mid-fifties in the resurrection stone scene. You could argue that he “ages” in death or something… but he also looks old during the first film in the Mirror of Erised.

I know Sirius is supposed to look aged and gaunt from his time in Azkaban, and the same for Remus with his lycanthropy… but still. Both the actors were way too old to be playing characters in their mid-thirties.
I guess we’ll always have the fancasts. Ben Barnes and Aaron Johnson are the only two people I will ever picture as Sirius and James.

But I already went over both of those in Part 2 of my rankings.

Why The Magicians Is My New Favorite Show