Faerie Queens at the Ren Faire

Once upon a time, in a village filled with jousting, flower crowns, and medallions, Catherine and Elizabeth went on a magical adventure.

I got to travel back to England for a day, and it was glorious. I love Ren Faires, but I hadn’t been to one since I was a little kid.

History: A themed village in the age of Henry VIII

I wore a dark blue, off-the-shoulder dress that fit the scene fairly well, but next year I want to dress up even more. It’s one of the only places where I can fulfill my princess costume dreams and not be judged.

Pro tip: The map they give you, for the MD faire anyway, is completely useless. We had no idea where we were half the time, and maneuvered our way around by remembering certain landmarks. It’s a huge village. The whole thing was very overwhelming when we got there, so take your time and remember the buildings. Have a meeting spot if you’re in a big group.

We wandered around for a bit, and took everything in. There was so much to see and do. You could easily get a 2-3 day pass and still have new things to do each day.

The first thing we did was buy flower crowns because DUH. They’re beautiful, and I’m probably going to wear mine as often as I possibly can.

We also bought some medallion necklaces. If there’s one thing I’ve learned from Cat & Elizabeth day trips, it’s that we’re both very indecisive when it comes to jewelry. Flashback to our Harpers Ferry visit where we took half an hour trying on friendship bracelets. This time was even more intense. They have huge charts of designs you can choose from. You pick two and get one stamped on either side of a coin. The machine is exactly like the one that would’ve been used to stamp coins during the Tudor time period.

I finally narrowed mine down to a Viking compass called a Vegvísir. I originally wanted that as a tattoo someday, but it’s quite large and intricate, so this is a good compromise. I chose a ship on the sea as my other design. Cat chose a rose fairy and a tiger (very fitting). They both came out beautifully, and it’s my new favorite piece of jewelry right now.

We wanted to buy a piece of clothing too, but the dresses and capes are absurdly expensive, which is why some people opt for rentals. If I was richer, I would go all out for the Ren Faire – an every day pass, decked out in full costume. 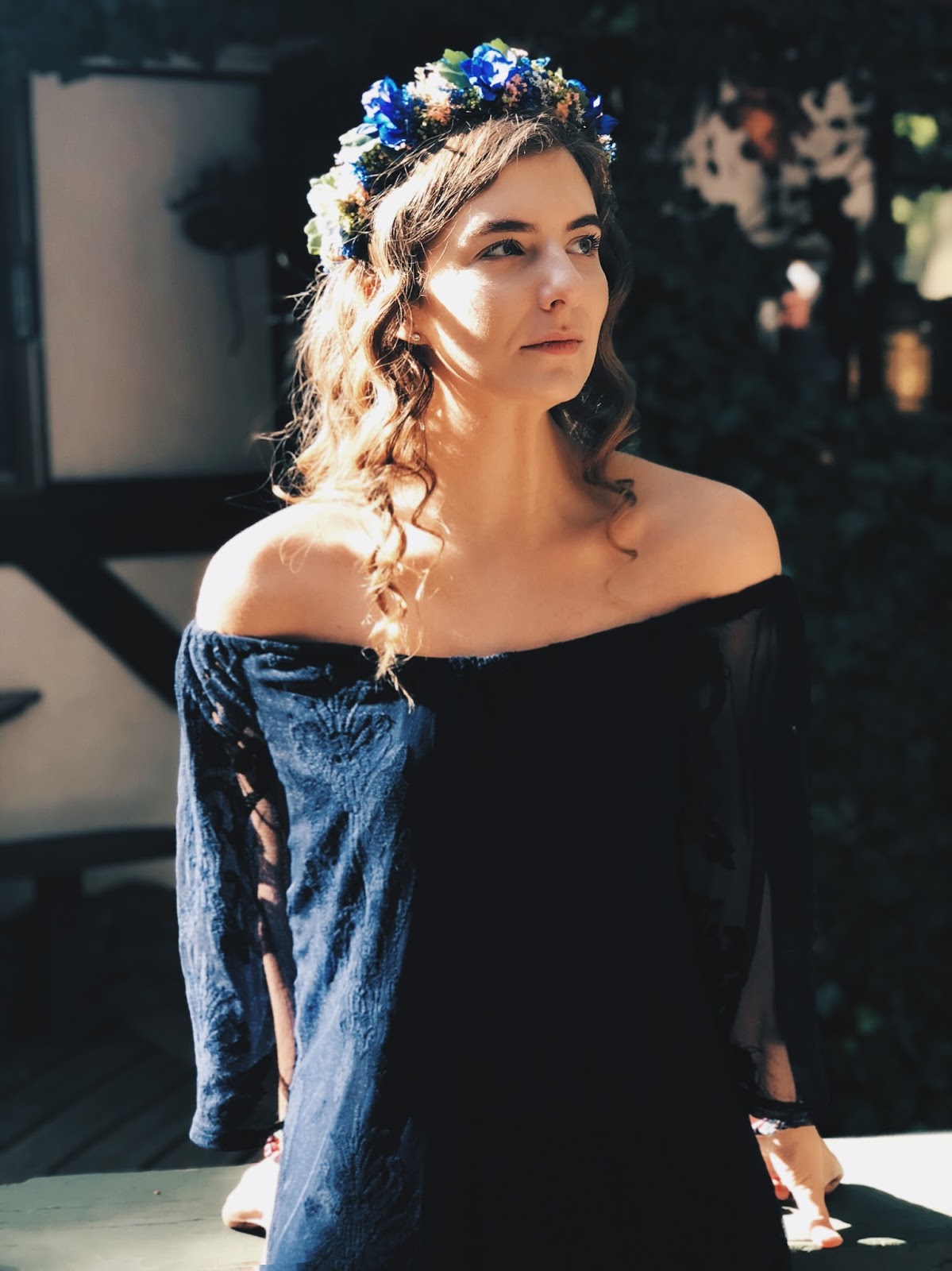 We watched a couple of shows. One was with a professional knife thrower and his assistant. The tricks were good, but their chemistry and dialogue were the best parts. We low key wanted to ask them if they were a couple after the show. We also saw a bagpipe band and belly dancer. I think they inspired Cat to quit college and take up a new career.

My favorite show was definitely the jousting. I could watch it all day. Our guy looked like a Game of Thrones character, and I completely fell in love with him. He was the hero of the storyline.

Everyone was introduced, they rode around on horses for awhile, and then they all started fighting. It was hard to hear, so I don’t know why they were fighting, but we just went with it and cheered for our guy. He got stabbed a few times, and almost strangled, but he was victorious in the end. It was truly exhilarating.

It was starting to get dark at this point, and there were significantly less people. Most of the people walking around were in full costume. The atmosphere felt more authentic and magical, like we were actually in an old English village. It was perfect, and I’m already excited for next year. 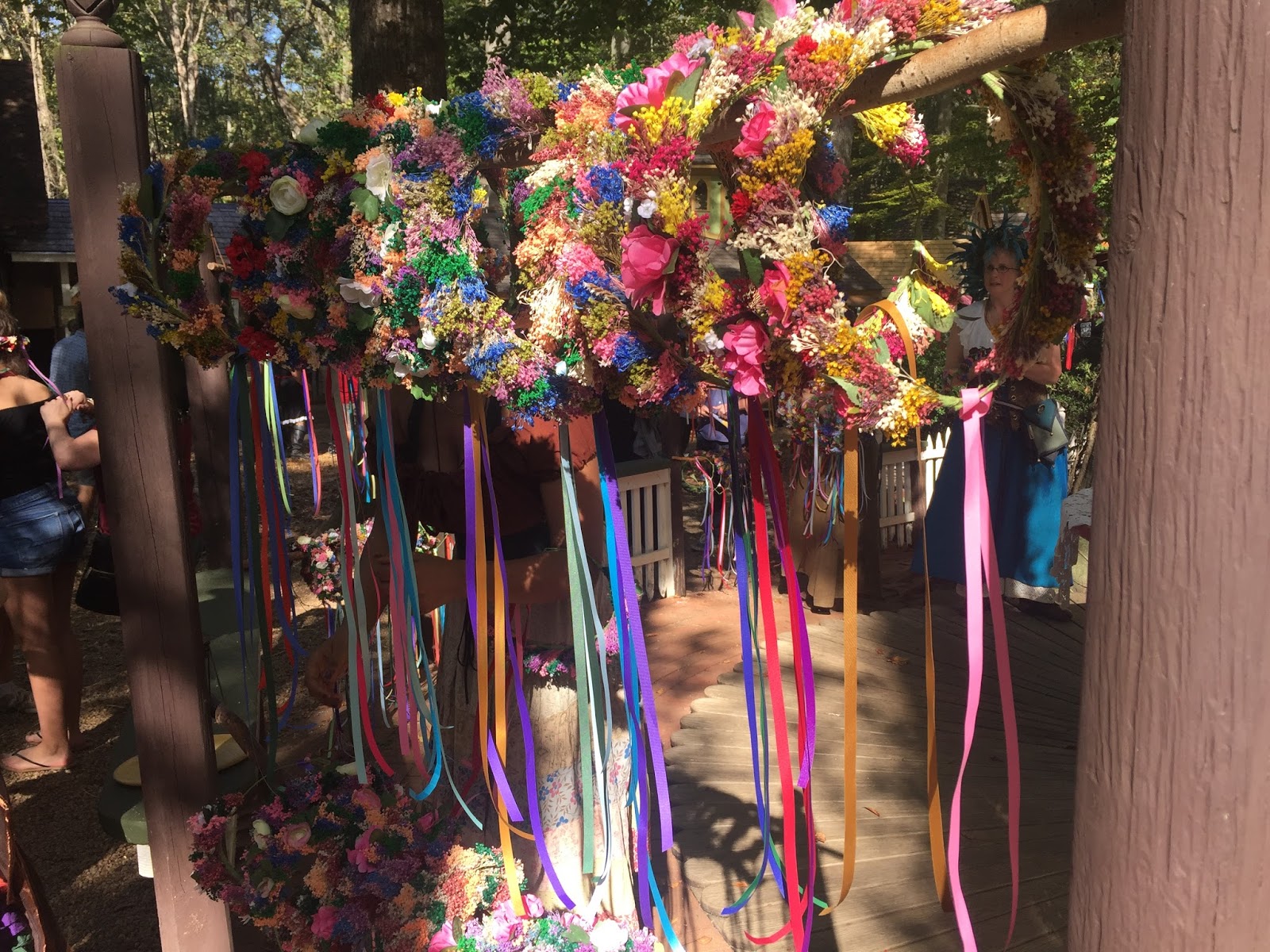