I’ve seen every single Harry Potter film so many times, from my own viewings to Freeform’s Harry Potter weekends. I could probably quote all of them from beginning to end at this point.
This list was really hard for me to make. I grappled with some of the rankings and went back and forth on a few of them. I didn’t want there to be any ties, even though realistically there are definitely a few ties for me. I could probably be swayed on a few of these, but, for now, this is my definitive ranking.

I’m certain that I have at least one unpopular opinion on here, but I think a lot of my rankings are fairly agreed upon by the majority of fans. My standpoint is somewhere between super-fan and cinema lover. Some diehard fans may penalize a film just because they took out a small detail from the books, but that’s not me. As much as I love books, especially these books, I never go into a book to movie adaptation and nitpick. You have to understand that written books and cinema are two very different mediums. There are time constraints and some things just don’t translate well on screen.

That being said, there is an upcoming post all about my biggest qualms with the films… because, trust me, I do have some.

So with all that in mind, let’s get on with the rankings of this beloved film series… 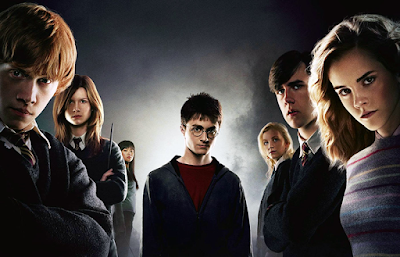 This really shouldn’t come as a surprise. I feel like a lot of people would agree that this is one of the weakest films. For one, it leaves out a lot. I think they gave a valiant effort considering they had to adapt the longest book into one film. The book is over 800 pages… that’s a lot of material.

1. The Ministry scenes are where the omission of book material is most obvious. The Battle at the Department of Mysteries is a huge part of the book. There are so many rooms and things that happen to Harry and his friends that they had to take out of the movie. I really, really missed those scenes because I think they’re some of the strongest in the book.

2. Another reason I think this movie is the weakest is because the book itself is one of the weaker ones. Harry is in his angst phase. He’s an angry, frustrated teenager in full force. I love it, but I think it can be a tough read at times.

3. My last complaint about the movie is That Scene. The one where Harry is being possessed by Voldemort. That scene is so uncomfortably strange. I don’t know what direction they were giving Daniel Radcliffe, but it was bad. He looks constipated. And the shots of Voldemort making weird sounds and facial expressions is borderline comical. I hate that entire sequence. It’s only briefly saved by the shot of Harry’s friends standing on the side.

1. Although I hate the scene that immediately follows this one… Sirius’s death is done very well. The emotion and slow motion shot is perfect. Remus holding Harry. The music. Harry screaming. It’s exceptional. Apparently the director said that he wishes they had held the shot of Harry longer.

2. Daniel Radcliffe is at Peak attractiveness. That may be a dumb reason to love this film, but alas I don’t care.

3. Umbridge is brilliantly done. She’s quite a character to bring to life, and I think they did it justice.

It’s not bad, but it’s not one of the best. The overall tone fits the film wonderfully, but the omissions killed me a little. I totally get why they took stuff out (time constraints), but it’s also part of what made the book so good. Plus, I think it ended up negatively impacting the last two films.

1. Inroduction to horcruxes/Omission of memory scenes
The foundations for the Big Final Storyline are laid in this movie. We learn about horcruxes for the first time, even though we’re actually introduced to one all the way back in Chamber of Secrets. This sets up the final two films. Everything hinges on us learning and understanding horcruxes. The book dives head first into this storyline, but the movie has to omit huge scenes. We don’t see all of the memory scenes, which means we don’t learn all of Voldemort’s backstory. I think the scene I missed the most was that of the Gaunts. It was so ripe with cinematic potential, but they had to cut it. The movie does the best that it can with explaining and delving into horcruxes, but there still seems to be something lacking. I almost feel like there was too much emphasis put on Draco Malfoy’s story, and not enough on the big, overarching story of horcruxes, Dumbledore’s collection of memories, and Voldemort’s backstory.

2. The sepia tone.
The entire film looks like they filmed it in a weaker version of sepia. I can’t stand it.

3. The horrible awkwardness between Harry and Ginny.
It’s a heavy cringe. I don’t know why they didn’t just keep the first kiss from the book. If the actors had more chemistry, the scene they gave us would’ve worked… but it was strange and so, so awkward. Daniel’s Harry is awkward, and that works because Harry is canonically very awkward. Ginny is fiery and confident, but Bonnie Wright plays her like a girl version of Harry.  It doesn’t work on screen at all. I think Ginny is the one character that they cast too young, and it wasn’t the right fit as she grew up.

4. Ron sitting in the background during the final conversation on the Astronomy Tower.
Just… why? Why is Ron forced to take a backseat? This is actually my #1 problem for the film series as a whole. Ron progressively gets pushed to the background throughout the series. It has me seething.

2. Ron, Lavender, Hermione.
That whole storyline set against Malfoy’s storyline is wonderfully done. There’s a stark contrast there, and I love it. Plus, we get the iconic Hospital Wing Scene.

3. It’s a deleted scene, but the In Noctem scene.
I get chills every time I watch it.

4. Dumbledore’s death.
The Potter films definitely know how to do death scenes.

5. Every Harry and Hermione scene. 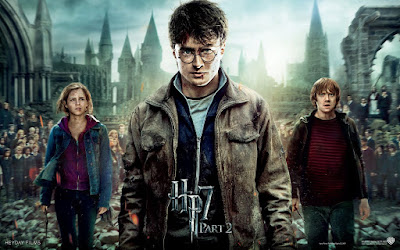 “What?!” You scream… “Yes!” I scream back.
In some ways, this is kind of my least favorite. As a film, I think it’s arguably and objectively the best. It has 98% on Rotten Tomatoes. It’s a Great Film. Very well done. But… I still don’t love it nearly as much as the others.

1. There’s something about the pacing that bothers me. It’s too fast.
There’s so much action and plot jammed into this film that we lose a lot of good character moments. I think if you pair it up with Part 1, as one big movie, it works better. I just feel like this one is a little plot heavy. And although I know exactly what’s going on at every moment, people who didn’t read the books can easily get lost in it. From the horcruxes to the Deathly Hallows to Harry’s “death”. It’s a lot to take in if you don’t have knowledge from the books to support you. I still get a little mind warped when I think about all the pieces that come together in the end. It’s exceptional writing on J.K. Rowling’s part, but the film struggles a little, stemming back to the weaker foundation laid out in Half Blood Prince. Granted it’s a lot easier to explain complex plotlines in a book. Screenplays rely solely on dialogue.

2. I have a love/hate relationship with Voldemort’s death.
The symbolism of his mortal, human body falling to the ground is so amazing, yet we get something else in the movie. It’s beautiful to watch, but the other version is better.

3. Dumbledore’s backstory.
We don’t get enough of it. I feel like the films really shoved the idea of Snape and Dumbledore being wonderful, perfect heroes down the audience’s throat… but it’s just Not True. They skirt around his backstory during the scene with Aberforth, but it’s so vague and gives the impression that Aberforth is just a bitter old man who was probably jealous of his brother.

4. James being pushed aside again for Snape’s heroism.
He’s basically ignored in the resurrection stone scene, which aggravates me every time. This should probably be under Order of the Phoenix too because that’s where it’s even more prevalent. It’s another one of the biggest issues I have with the series as a whole. James Potter is downright villainized and ignored in the movies to make Snape look better. There I said it.

1. The cinematography.
This film is visually stunning. It’s beautiful.

3. Pretty much every single scene during the Battle of Hogwarts.

5. That slow motion image where Nagini is about to kill Ron and Hermione.

6. Harry saying goodbye to Ron and Hermione.
He doesn’t say goodbye in the books, but I’m so glad they changed it in the film. It’s dramatic, emotional, and the kind of book to screen change I fully support. Harry and Hermione’s hug is amazing. Though, I hate that Harry doesn’t also hug Ron. It felt strange that we didn’t get another group hug.

7. Snape’s memory scene.
Beautifully done. Cinematic mastery. It evokes so much emotion. This is the one instance where they can get away with dedicating a whole sequence to explaining stuff. Between the revelation of Snape’s friendship with Lily to the discovery that Harry is a horcrux… It’s perfect.

8. Narcissa checking to see if Harry is alive.

9. The final shot
Except for the part where Ron is essentially cropped out, though that probably depends on your screen size.

The one that started it all… a True Classic. Honestly, this film never gets old for me.

I don’t have anything bad to say about this film. I just don’t think it’s as strong as the other four that I have ranked higher. It’s almost equivalent to a really good pilot episode of a television series. It’s great, but the other ones are better.

1. The child actors!
Wow, they cast some great kids. If this movie came out in 2017, everyone would be just as obsessed with them as we are with the Stranger Things and IT casts.

2. The magic is real.
Everything is so shiny and magical in this one, more so than the others. We’re being introduced to a beautiful new world through the eyes of a neglected 11-year-old, and that theme really resonates with the tone and visuals of the movie. The Potter series does an excellent job visually conveying tone. Just look at how the Warner Bros logo transforms from movie to movie. The darker the story gets and the worse things get for Harry, the more decrepit the logo gets. Compare this film to the last two films and you’re looking at a huge leap in tone and maturity.

And then there were four… Which film do you think will come out on top? Are any of the above movies your favorite in the series?

Why Daenerys Targaryen Should Be Pitied, Not Hated

The Truth About Credence Barebone & Leta Lestrange: The Crimes of Grindelwald Review