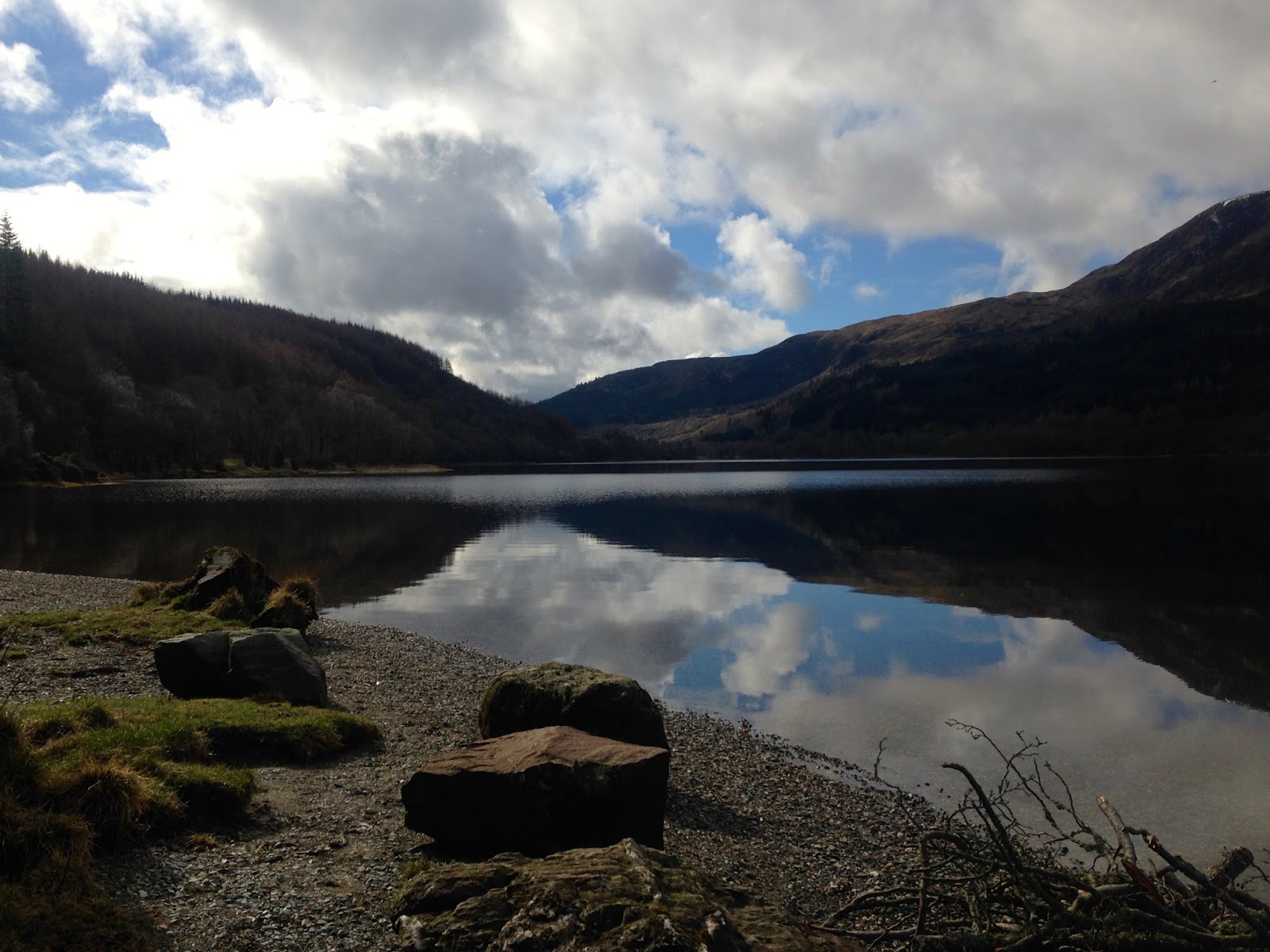 I don’t even know if I can truly describe the magic of the Scottish Highlands in words. But I’m going to try…

I took a tour through the Western Highlands twice, but went to different locations both times. So, let’s dive right into the different trips…

Sing me a song of a lass that is gone, say could that lass be I?

Times Visited: Twice (once in February, once in late March)

Weather: A little chilly, but not pretty good weather. In February, it was definitely colder and rainier. Bring a jacket/coat that’s good for rain, but you don’t need to bundle up unless it’s unusually cold that day.

I embarked on my first trip into the Highlands with with my American friends, Ben, Paige, and Anna. We traveled past Stirling castle, and stopped at Kilmahog. It was basically just a place to get coffee and stare at lush green fields full of cooing sheep, but a beautiful photo spot nonetheless.

The next stop was Glencoe, which I would like to go back and see again since it was raining and difficult to get good pictures. Regardless of the foggy, wet weather, it’s probably one of the best places we stopped to see. It’s one of those places that is so vast and glorious in person that it doesn’t even look real, and almost looks like a large, two-dimensional painting at first glance.

Tons of movies have filmed various scenes at Glencoe, Harry Potter being one of them. It’s the location of Hagrid’s hut in The Prisoner of Azkaban.

Fun Fact: In case you didn’t already realize it, Hogwarts is located in the heart of the Scottish Highlands. For some reason… I never thought about this until I was there.

Glencoe is most famous for its gruesome history, which made our dark, rainy experience especially haunting. It was the sight of a horrible massacre in February of 1692. Approximately thirty-eight members of clan MacDonald were slaughtered by guests, who had accepted their hospitality, on the grounds that the MacDonalds had not promptly pledged loyalty to the new English monarchs, William and Mary. Homes were burned to the ground and people (mostly women and children) died from hypothermia. It sounds a lot like something that would happen in Game of Thrones (Red Wedding anyone?). 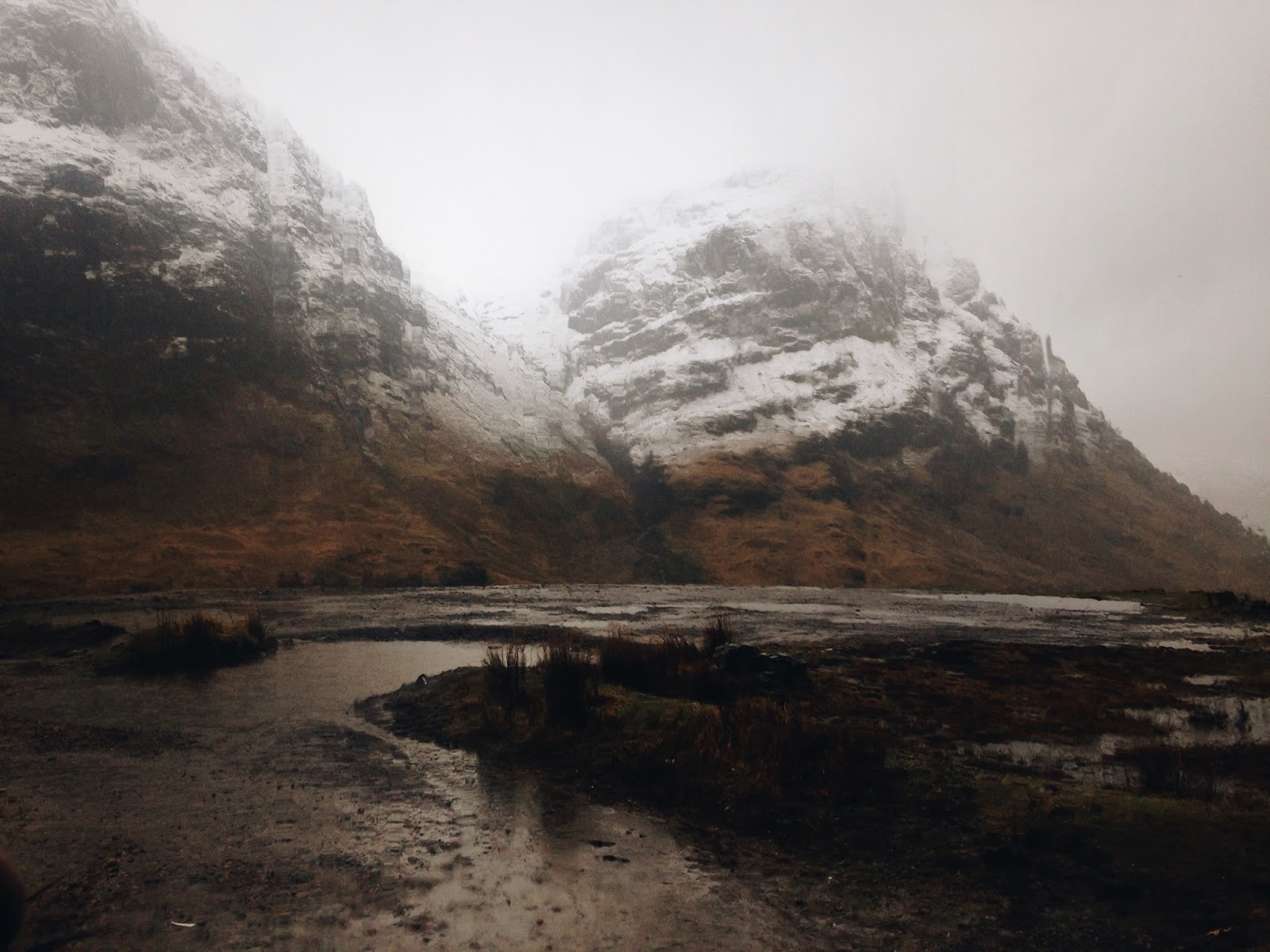 We passed by Ben Nevis, which is Britain’s highest mountain, and stopped to take a photo of the surrounding scenery. Everything was completely covered in snow. It’s insane how quickly the weather can change within a few miles. We went from green pastures, to a rainy glen, to a snowy mountain.

Next, we stopped along the Loch Ness, and may or may not have seen Nessie. I signed a confidentiality agreement, so I can’t really say much more on the topic. 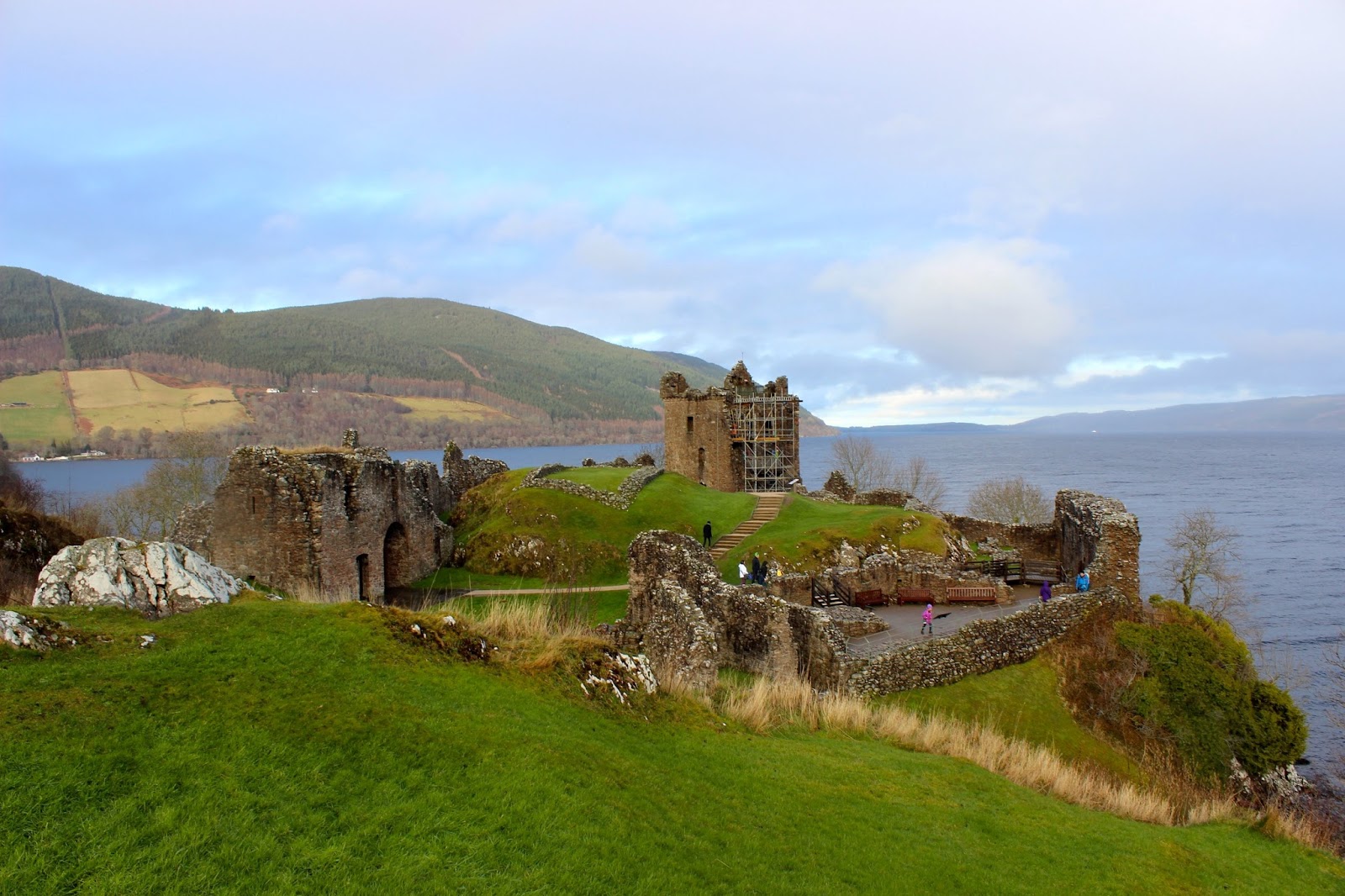 We drove onward to Urquhart castle, which is nestled on the shores of Loch Ness.

The castle was wondrous, completely ruined, but still breathtaking. We went through the visitor’s center and then ventured “into” the ruins and explored for about an hour. Restored and preserved castles are awesome, but there’s something eerie and adventurous about delving into a decrepit castle. It’s something you simply have to experience if you visit the UK, especially Scotland.

After the castle, we boarded the river cruise and traveled along Loch Ness, and then got back on the bus to start the journey back. We drove through Inverness, which is definitely a place I’d like to go back and explore, and then made our way into Edinburgh. It was a long, relaxing ride full of melodic Scottish music.

If you want to know more about this trip, here is the link to the tour’s page.

For this trip, we went on a similar route as the first trip, but made completely different stops.

The first stop was Doune Castle. This was a huge highlight for me because it’s the exterior setting of Castle Leoch in the STARZ show, Outlander. It’s also featured in Monty Python. 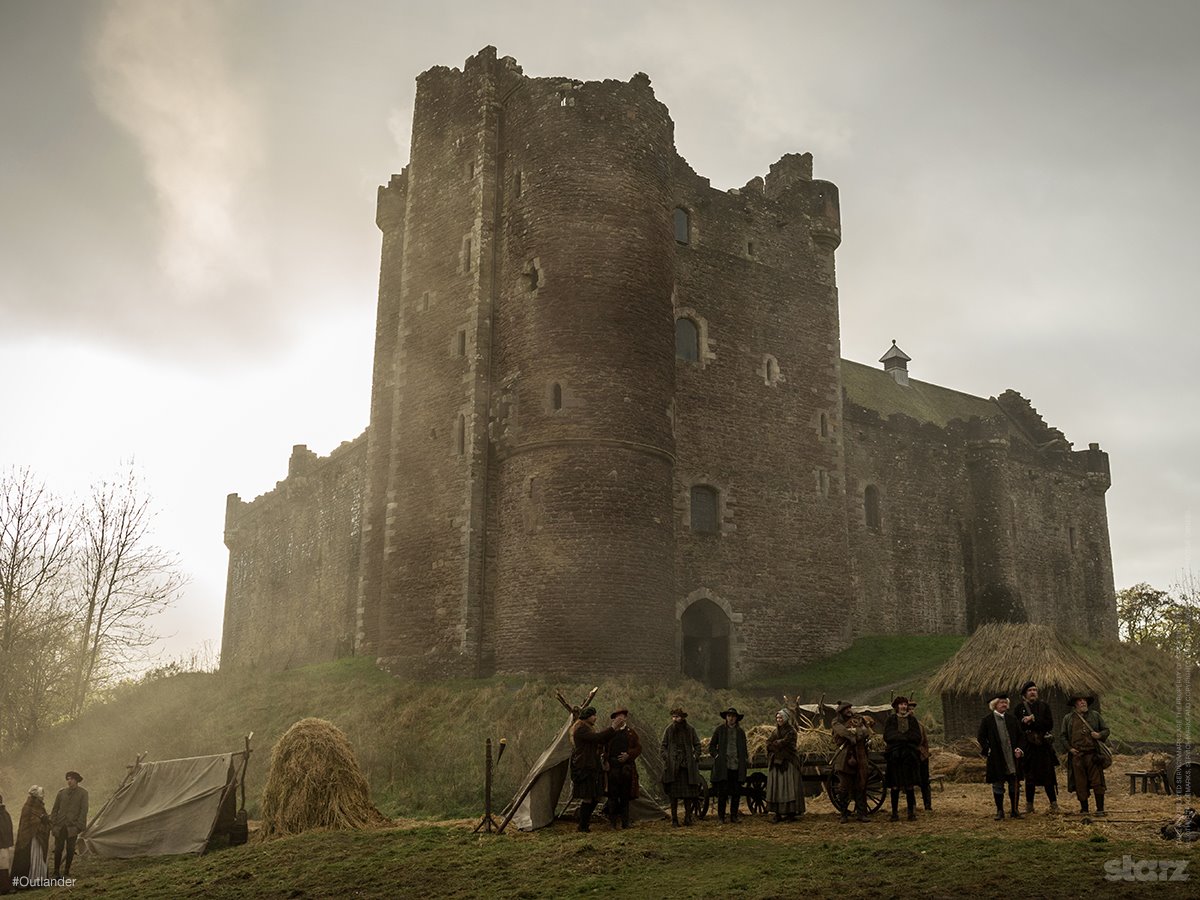 This definitely isn’t a ruined castle, though it’s not really opulently modeled either. It’s mostly empty and bitter cold. Doune Castle is huge, so there’s lots of winding steps, corridors, and hidden rooms to discover.

The next stop was on the shores of Loch Lubnaig. This was one of the best photo spots I visited in Scotland. I wanted to take a picture of every single angle. It reminded me of a majestic, enchanted forest from a fairytale.

Next stop was Kilchurn castle. This one is also in ruins, and we couldn’t go inside, but it still managed to be another one of my favorite stops. It’s a short walk out to the ruins, and the surrounding scenery is breathtaking. I was basically walking in circles, trying to take a photo of everything. The area is so peaceful and full of tranquility. I honestly want to live out there. Just build me a little cabin near the ruins, and I’d be content. I know I keep going on about fairytales and magic, but it’s honestly the best description. It felt like I was visiting a completely different world. 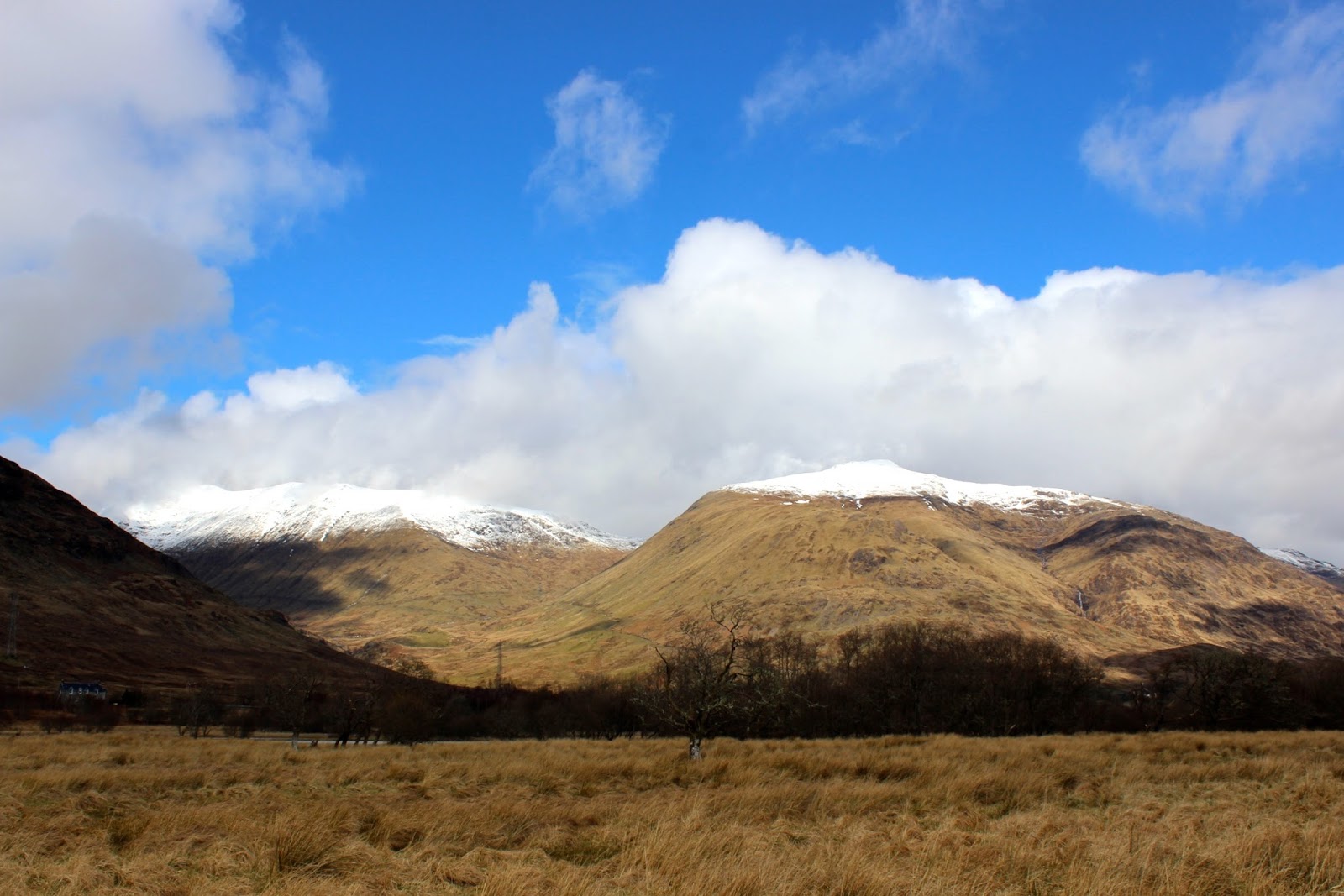 We traveled to Inveraray, a little town with a striking, turreted castle. We were quite famished, however, and opted to go into the town for
lunch instead of taking a tour inside. The exterior of this castle was used in Downton Abbey for the setting of Duneagle Castle, which is the MacClare family’s residence.

We briefly stopped along the Arrochar Alps at a place called “Rest and Be Thankful”. It’s an elevated spot with spectacular views. You can
see the surrounding mountains and the old valley road, which was built by General Wade after the Jacobite rebellion. 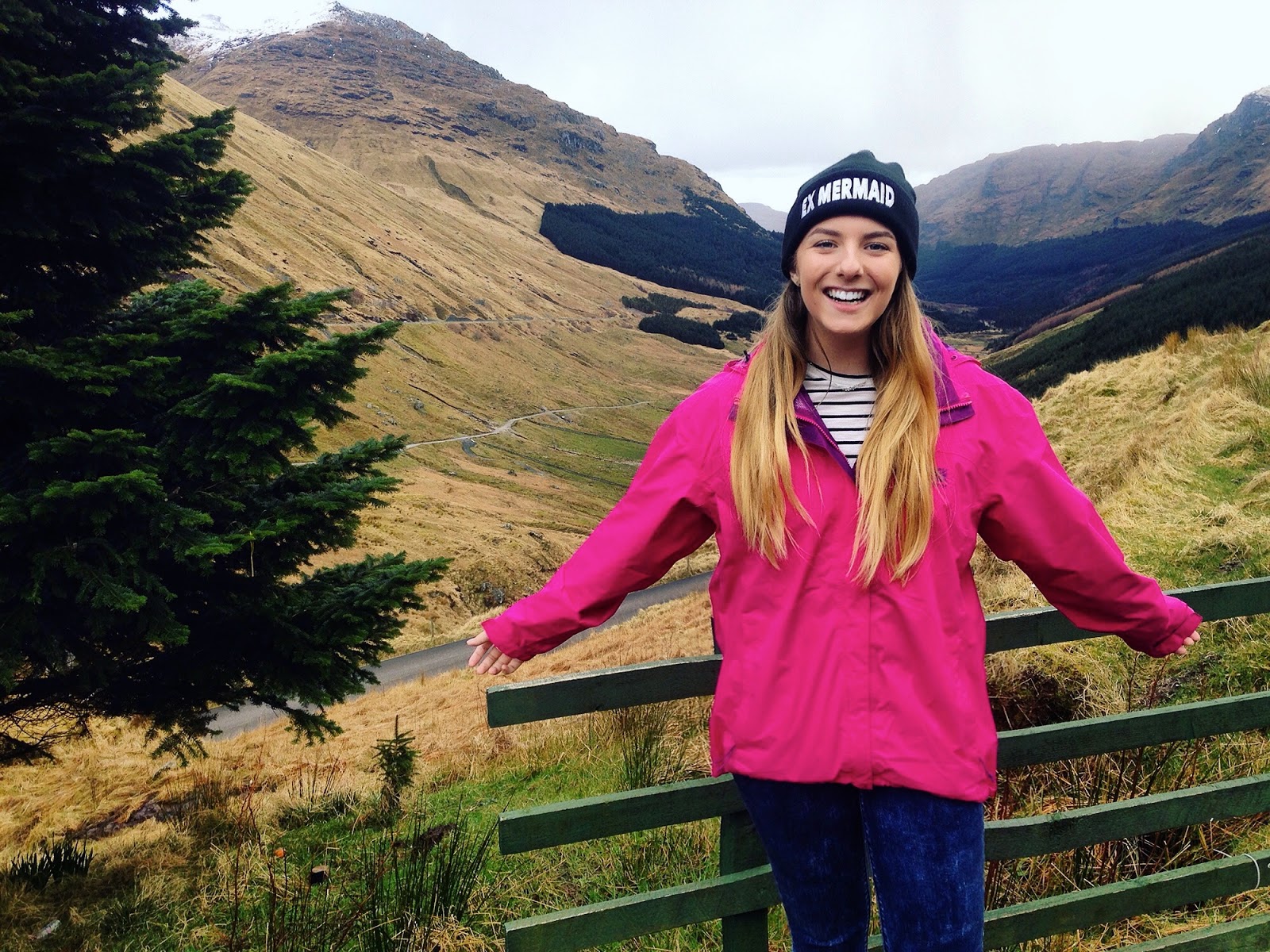 Rest and Be Thankful

The last stop was Loch Lomond and a lochside village called Luss. Let me just say, I adore Luss. It’s charmingly quaint, and has exquisite views of the loch. I felt weird taking photos of people’s homes, but the little cottages were honestly too perfect not to photograph.

Okay, I lied – the last unofficial stop we made was on the side of a small road to take photos of Highland cattle. It was a random, unplanned stop, but totally worth it.

If you want to know more about this trip, here is the link to the website’s page.

I didn’t actually rank the Scottish Highlands on my list of “Best Places Traveled Abroad” because I visited so many different locations, and I was trying to focus on specific towns and cities. So let’s just group it in with Edinburgh, and say it clocks in as #1. Exploring the Scottish Highlands is an enchanting, otherworldly experience, and I highly recommend a visit. For me, I’d love to go back and see more of Inverness, Eilean Donan castle, and travel to the Isle of Skye (cue Outlander’s “Skye Boat Song”).

Packing for Study Abroad: How to Pack Your Life in a Suitcase

A Fairytale Wedding at Thornewood Castle